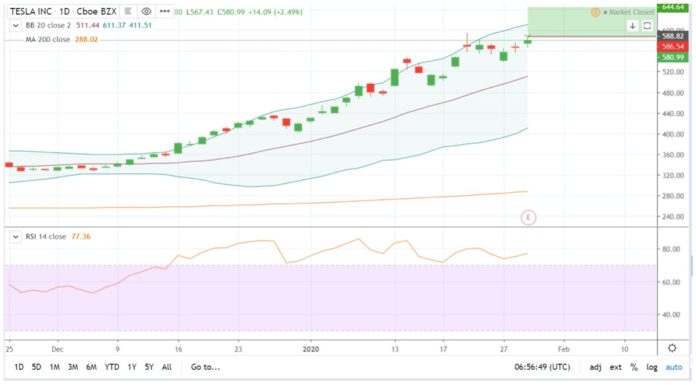 Executive Chronicles|Tesla runs monster rally, crossed 600$ and now what next for Investors?|Tesla stock has been on fire. Shares are up more than 190% from 2019 lows, leaving investors to wonder what’s next for the electric-vehicle pioneer. On Wednesday, Tesla reported a profit for the final quarter of 2019 — its second quarterly profit in a row. The stock doubled since Oct. 23, the day before it jumped more than 17% on an earnings-fuelled gap up. The main achievement is, according to Gulf Brokers, that TESLA sold 367,500 cars in total in 2019 — more than it sold in 2018 and 2017 together.

Tesla stock soared 12% late Wednesday after the electric car maker reported better-than-expected quarterly earnings. The stock was already up 39% this year. Revenue rose to $7.38 billion from $7.23 billion a year earlier. Analysts had expected revenue of $7.02 billion. The Model 3 maker’s $7.38 billion in sales for the fourth quarter beat estimates and carried the company to its second consecutive quarterly profit.

Tesla stock debuted at less than $20 a share in 2010. It hit $200 in 2014. And now, after strong deliveries in the fourth quarter and the successful launch of a new factory in China, it’s above $500 — giving the company the highest valuation of any U.S. carmaker ever.

The stock surged to almost $650 after the close of regular trading. But in last few days the stock shows some weakness in the upside run. As we know there are a lot of traders shorting this stock from last few days because of RSI Overbought & the price close to the 3rd Resistance pivot on the daily. So still there are room for retracement before heading more higher.

As per our previous prediction TSLA crossed 600$ level on Wednesday after strong earnings report. 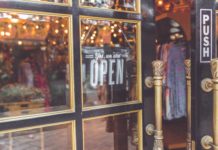 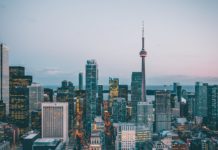 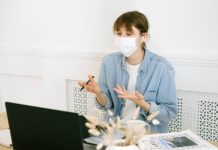 Smart Money Tips for Small Businesses to Survive and Thrive These...