It was a cool Thursday afternoon in the cozy conference room of Rainbow Philippines. We were going to interview one of the sons of Senator Gil J. Puyat. From what I’ve gathered, Vic Puyat is a mild-mannered man and his pioneering spirit has been the driving force behind his company’s successes.

When Vic entered the conference room, you can feel his welcoming presence. He is very candid without being blunt. He has a ready smile and his avuncular manner makes you want to seek his advice. How was it growing up in the Puyat household?

“I was the middle child of seven. There were five boys and only two girls. I was the fourth boy in a row, so probably my mother was disappointed to have another boy. But luckily, after me, a girl came. So I told my mother, ‘Look, without me, you would never have gotten a girl,’” Vic answered.

“I was not a very ambitious guy,” Vic said humbly. “As a matter of fact, I enjoyed being with friends. And what would we do? We’d bike around the neighborhood, visit girls. We were living in Sta. Mesa Heights and St. Theresa’s College was there… and basketball.”

Vic studied in UP and took up Business like his other brothers. The late Senator Gil J. Puyat was an educator and the Dean of UP Business during the time of President Manuel Quezon. Senator Puyat was the youngest dean, “and for him, all of us should go and take business. Then he told me, if you want to pick agriculture after you finish business, then that can be your business.”

“So he was thinking of agribusiness already way ahead of his time because he knows that agriculture is also a business. You’re not just there for a hobby. You’re there to make something out of it.” So just like everybody at that age, Vic followed his parents’ desire.

But it was not a walk in the clouds. Vic had to earn his stripes. “It took time. I was not a boss right away. That I think was a good thing that happened to me because after I finished my BSBA, I was told by my father to work right away. He gave me a 2-week vacation and then he said, Now, you must work.”

So his first work as at Manila Bank, as a clerk in the Foreign Department. His salary was P140 per month “That was already high at that time. Because the minimum was P120. And I was a college graduate so P140. That’s how I started.” 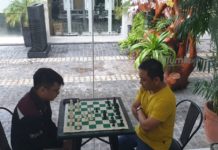